Multi TVs are essential for a 24/7 news cycle

By now, barrels of ink and scads of online real estate have been dedicated to President Trump’s media consumption habits. We know that he wakes up early to watch TV and tweet the grievance du jour. We know he is drawn to cable news—even the channels that he so routinely pillories. It is not uncommon for his Twitter account over the course of the morning to serve as a readout of what pundits were saying on the morning shows, and several stories have gone into great detail about the alignment between the president’s tweets and specific comments made on one channel or another.

Some stations are capitalizing on it, raising their advertising rates based on the President’s TV watching habits. POLITICO last week reported that Fox News and MSNBC have been the first to cash in, raising advertising rates for sponsored time on some of President Trump’s favorite shows. One media buyer quoted in the piece noted that “The president’s media habits are so predictable, advertisers migrate to those areas. “In other words, if you want the opportunity to make sure the President is aware of you, you’re going to have to pay for it. Comedian John Oliver is the latest to the game, paying to run a series of ads featuring “facts Trump should know” on CNN, MSNBC, and Fox News.

I read a lot of political news every day, covering all aspects of the government. It’s a habit I developed as an entry-level staffer on Capitol Hill. In between coordinating tours for Constituents, greeting visitors to the office, and helping to make sure everything ran smoothly, I aspired to be a media operative and so I consumed as much media as I possibly could. This habit has been crucial to my ability to provide informed, quality counsel to clients on public affairs and media issues.

While it’s tremendously helpful to do all of this reading, the past three weeks of a new administration, on top of the past 8 months of a contentious campaign, have shown us that for the next four years at least, the Trump White House will view TV as the king of political media. With presidential policy and outward-facing comments increasingly crafted toward—or in reaction to—television, reading the news is simply not enough.

For quite a while now, I’ve had an old laptop on my desk, streaming one of the major cable news networks over the internet. I’ve rotated the network to provide a diversity of perspectives, or based on a particular client’s issues or needs. But given the new importance of television in federal decision-making, one channel has proven to not be enough. That’s why, over the past few months, I’ve sourced used-televisions from the secondary market to build a media center on my desk that will allow me to monitor multiple networks concurrently. In so doing, I’ll better understand the guests, angles, and coverage to benefit our public affairs clients within this crucial medium. This is a setup not uncommon to any Congressional press office, and it is certainly not uncommon to the TV-obsessed White House.

I learned early on in my career the value of television, working with a team that had successfully used the medium to engineer the defeat of a six-term incumbent. While most Americans get a significant share of their information from TV, it’s never been more important to generating influence with the executive and legislative branches. The current administration is notoriously text-averse and image-focused, and all media practitioners should be turning to TV as a way to tell their stories and make their perspectives heard.

As I’ve set up this media center on the corner of my desk, there have been many jokes about its value come the March Madness and World Cup sporting seasons. But as LEVICK’s clients look to generate influence around a specific policy goal, the first step to do so is being steeped in how your audiences are consuming media and getting information. Reading— and watching—everything that might be news in “this town” will only continue to add value. 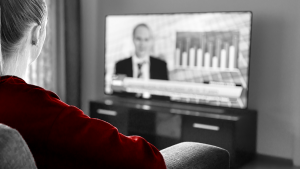 PrevPREVIOUSThe Constructionist Investor
NEXTSuffering from Hanger? Google Has the CureNext