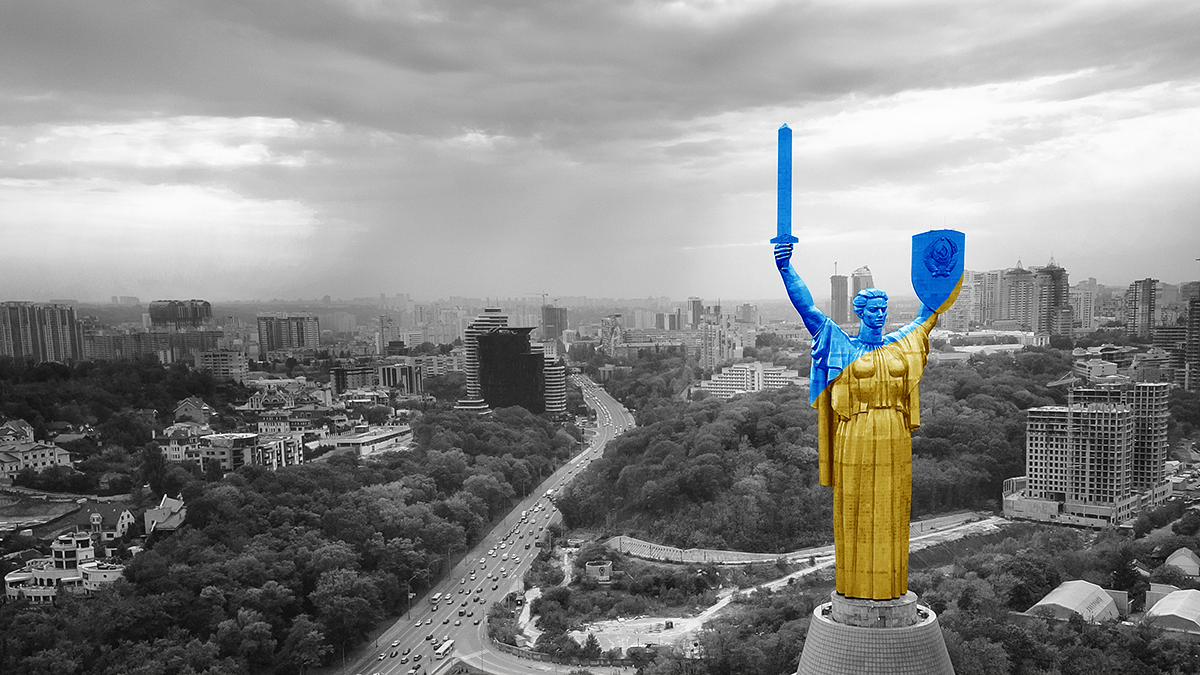 “Why so much grief for me? No man will hurl me down to Death, against my fate.
And fate? No one alive has ever escaped it, neither brave man nor coward,
I tell you – it’s born with us the day that we are born.”

This is the story of three journeys—two remarkable women on very different paths and the one we are all taking together.

When I was 16 and a waiter at summer camp, they announced the draft lottery numbers. I did not worry since it was 18 months prior to my eligibility, which seemed like an eternity in youth. But for the counselors and older waiters, it was a different story. Your lottery number was your destiny.

That was the price of a U.S. foreign policy in Vietnam that included ground troops. Today, the United States, NATO and NATO countries have engaged in a unified economic and munitions battle, arming Ukraine and economically strangling Russia. As a result, rather than spending our youth staring down mortality, for the vast majority of us who do not have family and relatives in Ukraine, about the only thing we have to be concerned about is inflation and the price of gasoline. Yet still, we complain. As much as I do not like paying more than $5 per gallon, it is an expense of treasure not blood. I am eternally grateful. Perspective is everything.

The weapon of unified economic pressure—slow but effective when used with pincer-like efficiency—is well worth noting. It is our new “domino theory” in reverse.

The Strength to Carry On

The week’s first podcast for In House Warrior, the daily podcast I host for the Corporate Counsel Business Journal, was with Olena Levshun, a Senior Partner with EBS—an accounting, law and consulting firm (and a member firm of IR Global) in Kyiv, Ukraine. She likely lost a cousin to the war, though with so little information, she cannot be sure. Despite the invasion, she feels lucky. She and her family have returned to Kyiv; they are together and she is at work. For her and her co-workers, going to the office is the balm. They do not focus on pronouns, socially divisive issues, temporary inflation or other issues that pale in comparison. Each day is a gift that they know is no longer guaranteed.

As she says, “You cannot cry all the time.” So, you find strength you never knew you had and carry on.

For companies wanting to be economic patriots—to do something to immediately support Ukrainians—you can reach out to EBS to have them do some of your accounting and legal work. You can reach Olena at [email protected]. Every day matters, so now would be an especially good time to connect. There is power in economics.

The Cult of the Robe

Deborah Kelly, a law school classmate of mine and a remarkable woman in her own right, also came on a show. She is a partner in the Employment and Labor practice at Manatt and, for ten years, was the former pro bono counsel to the National Abortion Federation. Deborah, who is known for her straightforward, “cut-to-the-chase” opinions, speaks for herself—not for Manatt—in this extraordinarily candid and opinionated interview.

She represented the Federation at the height of Operation Rescue when extremists were murdering clinic doctors. She is also the co-author of an amicus brief to the U.S. Supreme Court on abortion. This is a radically transformative moment for the Court and the nation as a whole, not just on abortion, but on dozens of issues including LGBTQ rights, marriage equality, access to contraceptives, privacy, interstate travel, substantive due process and many more. Suddenly, the world’s longest-lived constitution is not what we thought it was. Rights can disappear.

Deborah is fully aware of what some of the most extreme players in the pro-life movement are capable of, especially now that they have been unleashed and are already introducing and passing legislation in multiple states to make access to some forms of contraception, interstate travel and corporate health care limited and, in some cases, illegal. She provides recommendations for companies and delivers an unvarnished view of the road ahead.

Our job as a crisis and public affairs communications firm is to see “what’s next” and help clients avoid exposure. Tragically, two factors are coming together to radically threaten “business as usual.” The first, obviously, is the Court’s legitimacy crisis. Regardless of how you feel about any of the Court’s recent decisions, three quarters of Americans have lost faith in the Court. The “cult of the robe” is diminishing.

As much as we would like to “say it ain’t so,” on the front lines of the road ahead are universities, law schools, law firms and businesses.

Universities in red states are trying to develop new recruitment strategies, fearful of significant drops in enrollment out of concern that many women will choose schools in states where they will not be treated as criminals for unintentionally getting pregnant.

Law schools are meeting across the country, trying to determine how to teach U.S. constitutional law.

Law firms and their partners—such as Sidley Austin and, presumably, any law firm with Texas offices that have pledged to pay for out-of-state abortions—are being threatened by the Texas Freedom Caucus with “felony criminal prosecution and disbarment.” As of this writing, approximately 25 AmLaw firms have pledged to cover abortions and reproductive health travel costs for employees where restrictions are in place. Can prosecutions and disbarment attempts be far behind? What happens when law firms cannot operate in certain states or have to consider rejecting clients due to their affiliations or political beliefs? The threat to access to counsel may not have arrived, but you can see it from here.

In Federalist No. 78, Alexander Hamilton wrote that the judiciary has “no influence over either the sword or the purse; no direction either of the strength or of the wealth of the society; and can take no active resolution whatever. It may truly be said to have neither force nor will, but merely judgment.”

To put it more simply, as President Andrew Jackson said in response to U.S. Supreme Court Chief Justice John Marshall’s 1832 decision in Worcester v. Georgia, “John Marshall has made his decision; now let him enforce it.”

Though never a subscriber to “originalism,” I felt it was grounded is serious jurisprudence. If you looked back far enough, could you find the original intent? It did not seem that far from the concept of stare decisis.

Remarkably, it is worth noting that both the Organization of American Historians and the American Historical Association—the two leading professional historian organizations in the United States—and eight other U.S. historical associations have issued a joint statement, saying among other things, that the six Supreme Court justices in the majority in the Dobbs v. Jackson Women’s Health decision, “adopted a flawed interpretation of abortion criminalization that has been pressed by anti-abortion advocates for more than thirty years” and that, “[t]hese misrepresentations are now enshrined in a text that becomes authoritative for legal reference and citation in the future,” undermining the “imperative that historical evidence and argument be presented according to high standards of historical scholarship. The Court’s majority opinion…does not meet those standards.”

For the rest of us, this is known as a failing grade. What is originalism if it does not abide history?

Eulogy for Business as Usual

And businesses? How unfair, once again, that they are being pushed to the front lines of the debate.

When you are trying to make decisions about how actively you want to get involved as a business entity in the disruptive politics which are ravaging the nation, just look ahead to November. Imagine an America where election results are routinely rejected; Americans are intimidated from voting due to the color of their skin, economic status or precinct; where political violence is not just accepted, but where January 6th looks like a precursor, not an aberration. The decisions you make today will reflect not just on history, but on your fourth quarter.

It can be hard to see patterns when you are living life in real time. But the patterns are there nonetheless. The rise of political violence and its growing acceptance are terrifyingly real.

Rachel Kleinfeld, the author of many books and articles on political conflict has written that, “We’ve seen an uptick in Republican parties at the local level—though occasionally at the state level—using militias for security at party events, having militias vote on party business, in one case in Michigan having militias introduce legislation. You’re seeing a lot of photo-ops with militia members—things that normalize their interaction with the democratic process. These militias are being used to threaten other Republicans who aren’t part of this antidemocratic faction.”

Members of the GOP are, “endorsing violent attacks on the opposition without facing serious party discipline, fantasizing about settling political differences via paramilitary combat, vastly minimizing the January 6 insurrectionist violence or erasing it with propaganda, and describing January 6 rioters facing prosecution as ‘political prisoners.’”

When asked where America is on the continuum of countries experiencing political violence, she noted that, “the percentages of Americans endorsing violence are approaching Northern Ireland’s Troubles at their height in 1973.”

What Do Companies Do?

It is not just transparency but the very concept of evenly divided political donations that has reached its zenith. Like it or not, it is coming time to make a choice.

After January 6th, many companies paused their political contributions to the 147 members of Congress who refused to certify the election. Slowly these companies have crept back and are funding these politicians and others with relatively little notice. In a post-Roe world, we now see companies making political contributions that are diametrically opposed to their publicly stated policies on reproductive freedom. We are at the tipping point where it is riskier to “split the baby” than to take a position. This is a radical notion, but one not to be missed by company officials trying to make these decisions. Tomorrow—which is eminently visible—is going to be very different than today.

Yet, a year prior, Microsoft donated $250,000 to the Republican Governors Association, which is used as an umbrella campaign fund to help elect candidates significantly hostile to reproductive freedom.

CVS has pledged to support its employees’ right to choose by, “making out-of-state abortion healthcare services more accessible and affordable,” yet has made $290,000 in contributions to politicians who support severe restrictions on reproductive freedom, even in the case of rape and incest.

Ditto Amazon, AT&T, Comcast, Google, Wells Fargo and many more. It will not be easy for companies to navigate the twin crises of the Court’s waning legitimacy and growing political violence but trying to make both sides happy will not work for much longer.

In 1865, in the wake of the Civil War, many of the southern states tried to halt or undo Reconstruction. Through a series of laws known as the “Black Codes,” state legislators regulated how Black Americans worked, lived and worshiped with no protection for assault, robbery, rape or murder. This is what inspired the 14th Amendment. Until our 21st version of the14th Amendment comes, what will we do?

The Cult of the Robe

Keeping Your Eyes on the Prize

What Could Corporate Execs Learn from Sun Tzu? (Part II)

This week’s article is part 2 of 2 by Scotts Marrs, Managing Partner at Akerman’s Houston office and our first guest columnist, on his experience

From Eternity to Here

“Ah death, a change of clothes.” –The 14th Dalai Lama The endless fields of amber grain. Valhalla so far in the distance it is, we

This week’s article is part 1 of 2 by Scotts Marrs, Managing Partner at Akerman’s Houston office and our first guest columnist, on his experience