Where Strength Comes From 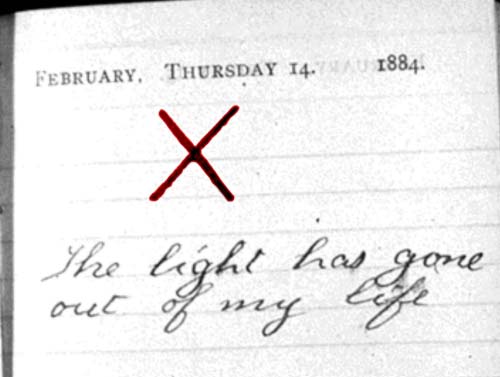 How did Teddy Roosevelt—who would later write in his diary, “The light has gone out of my life” —survive the loss of his 22-year-old wife Alice and mother Mittie, hours and a floor apart, while he rushed between their bedsides as each took their last breaths, on Valentine’s Day 1884?

What was it about Sir Ernest Shackleton and his crew that enabled them to survive being stranded for more than two years without food or chance of rescue on their expedition to Antarctica in 1915?

Where did the strength come from for Admiral James Stockdale, the highest ranking U.S. POW in the Vietnam War, to survive seven years in a North Vietnamese prison camp and then to grow so much from it that he looked back upon it as “an experience I would not trade?”

Closer to home, what about our grandparents or great grandparents? If they were born a little over a century ago their first memory outside of the family was likely to be of Teddy Roosevelt’s second inaugural in 1905, itself the result of a tragedy—the assassination of President William McKinley four years earlier. If they had been born out west, then certainly that first memory would be of the Great San Francisco Earthquake of 1906.

They came of age just in time for World War I and returned, if they returned at all, to be welcomed back by the worldwide influenza pandemic that lasted well over three years. Grandma did not have the right to vote until 1919.

Part of their 20s would be roaring until Black Friday, October 29, 1929, when the stock market crashed and the Great Depression began, lasting until World War II, when they would be in their early 40s. Some of them would go back to war while others timed it perfectly for their children—our parents and grandparents—to go the European or Pacific theater.

Only by the time they were in their late 40s would they begin to experience peace and prosperity. Not a snowflake among them.

Where does this strength come from?

The older I get, the more I am in awe. If you are as lucky as I was, there was many a night when one of the grandparents would tell stories, and we would get a glimpse, trying to picture a time long gone. I don’t recall a single complaint amongst the hundreds of stories. It was just life.

I thought I had known hard times, but I was mistaken. Through my early 50s, I knew almost nothing but prosperity peppered with the occasional setback and rejection, which I foolishly misinterpreted as hard times. Since that time, I have experienced one tragedy after another, suffering each one individually and collectively, testing my temerity far beyond the nadir.

I always thought that each year would be better than the last. But it turns out, Bette Davis was right. As she said in All About Eve, “Fasten your seatbelts. It’s going to be a bumpy night.” Given enough time though, day follows night.

There is a version of Simon & Garfunkel’s Sound of Silence by Disturbed which is so powerful, I can listen to it almost endlessly. “Hello darkness my old friend, I’ve come to talk with you again,” but now darkness is not loneliness as Art Garfunkel intended, but the abyss. If you keep going, though impossible to see at first and long after you think you cannot take another step, there is the gift of the reason. Surviving is hope’s revenge over tragedy. What we do with our survival gives tragedy its meaning.

When Covid first hit and I could no longer do global speaking tours, we modified our In House Warrior podcast for the Corporate Counsel Business Journal and made it a daily show—240 times a year. It may be a commitment, but it is also a bounty, like my own private PBS. With apologies to Dos Equis, it is where I get to spend time with the most interesting people in the world. Best selling authors. Retired politicians. Former counsels to presidents. U.S. and state Attorneys General. Each one telling their story, many in the most personal way.

That is, until, this week, when we aired the show, Luke’s Song and the Tragedy of Pediatric Cancer and the Power of Hope. In a deeply moving interview, Tim Brown, a former Vice President and General Manager of biotechnology at Genentech and now a volunteer with Children’s Cancer Therapy Development Institute (cc-TDI; full disclosure, I sit on their board) spoke about their personal journey with their son Luke, from fatal diagnosis to the historically slow efforts to find cures for pediatric cancers. In a remarkably candid conversation, Tim discussed the loss of Luke, only 20, six years ago, and how they managed as a family after receiving the shocking diagnosis without hope of a cure.

I did not know Tim until we did the show, and yet we went on a voyage of personal discovery. I admire everything about Tim—his strength, love and courage. Each day he gives more and more meaning to Luke’s life by helping other families. Who says time—or love—has to be linear?

This is where we find strength.

Next week, we will air a show with Annette Bakker, a PhD in Biochemistry and President of the Children’s Tumor Foundation, about the fact that cures for cystic fibrosis, muscular dystrophy, neurofibromatosis and rare cancers may have already been developed but that scientists don’t realize it yet. With minor tweaks, some of pharma’s discarded drugs could be turned into game-changing therapies for currently untreatable diseases. Hope is our elixir.

Doing a show each day allows us to cover so many topics, and while almost all are on law, public affairs and business, sometimes we cover the personal side—because all of us are on this journey together.

Also on In House Warrior this week:

A View of Antitrust with the FTC’s Former Director of Competition, Bruce Hoffman

Bruce Hoffman, a partner at Cleary Gottlieb and the former Director of the Federal Trade Commission’s Bureau of Competition, discussed his views on how businesses should think about antitrust with Lina Khan leading the FTC and Jonathan Kanter at the helm of the DOJ. He also provides an overview of state and federal antitrust reform legislation proposals and addresses the question posed by some critics, that antitrust enforcement needs to be radically changed due to U.S. market concentration.

My old friend Arvin Maskin, a partner with Mayer Brown and leader of their global Enterprise Risk & Crisis Management practice, discussed trends in class action and MDL—Multi-District Litigation. Arvin was former lead and senior counsel in some of the largest mass tort and product liability litigation matters, including “Agent Orange,” asbestos, breast implants, lead paint and many more. He also addressed the necessity and challenges of presenting scientific evidence in the courtroom, the critical differences between risk mitigation and crisis preparation and response, pressing challenges for in-house counsel and the role of boards on these matters.

Is the Chevron Doctrine Doomed?

Richard Samp, Senior Litigation Counsel at the New Civil Liberties Alliance, joined us to talk about the Chevron Doctrine—judicial deference given to administrative actions—which courts have followed for nearly 40 years but which now appears likely to be re-examined by the U.S. Supreme Court. Throughout his 40-year career in private law practice in Washington, D.C., Richard Samp has specialized in appellate litigation with a focus on constitutional law and has participated directly in more than 200 cases before the High Court.

Garage to Global With Guggenheim Securities

Where Strength Comes From

The secret to survival is to keep going. Seventeen years after the light had gone out of his life, Teddy Roosevelt was president of the United States. It was his reaction to the double tragedies of losing his wife and mother to diseases of filth and the unsanitary conditions of the time—typhoid and strep—which led to a newfound awareness and purpose. He had given meaning to tragedy and life after death.

When my father was 33 and a Korean War Vet, his 25-year-old wife—my mother—died unexpectedly overnight. Devastated first by the loss of so many friends in Korea and now his young wife, he asked a priest he happened upon, “How do I go on?” The priest turned my father around to face my six year old sister and the four year old me, sitting with our grandparents off in the distance, and said, “You don’t have a choice. You carry on for them.”

Winston Churchill was right. Carry on and “never, never, never give up.”

Listen to A View of Antitrust

Listen to Legend of the Defense Bar

Listen to Is the Chevron Doctrine Doomed

Listen to Garage to Global with Guggenheim Securities