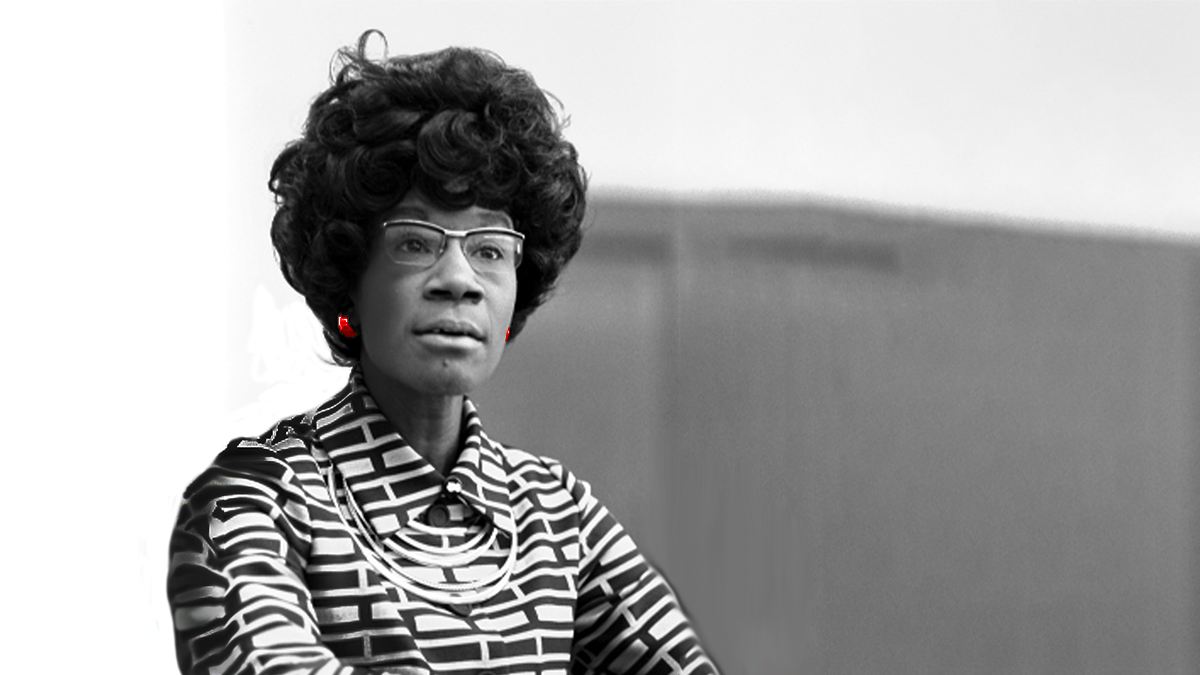 Photo from Library of Congress, Prints and Photographs Collections, modified for LEVICK blog

“I want to be remembered as a woman…
who dared to be a catalyst of change.”

The first presidential campaign I remember was 1968 when Vice President Hubert Humphrey ran. He suffered from a very late start—too late to participate in the Democratic primaries—due to President Lyndon Johnson’s shocking March 31 announcement that, “I shall not seek, and I will not accept, the nomination of my party for another term as your president.” From the start, Humphrey would have had to pull off a near miracle just to be nominated.

And that was it. I was hooked on politics. As a 6th grader, I was making HHH bookmarks and beginning a lifelong addiction to politics, though one tempered now by today’s vitriolic and sullied show-business quality to it.

In 1972, candidates George McGovern, Henry Jackson and Edwin Muskie were fascinating; George Wallace was frightening; and then there was Shirley Chisolm.

With only $300,000 in campaign funds, America’s first African American congresswoman—and the second African American woman to serve in Albany in an elected position—was running for president. “Fighting Shirley” ran a strikingly successful campaign, receiving 152 delegates, 10% of the total, which was good enough to end up fourth in the delegate count. The impossible had become possible.

This was the moment that tens of millions of young African American girls and women realized they too could run for president. It took a century after Reconstruction, but equality was starting to knock at the highest levels. Words can certainly inspire, but nothing is as existentially powerful as seeing icons who look like you.

I am also sure this moment was not lost on a 25-year-old law student named Hillary Clinton.

As Shirley Chisholm would later say, “I have certainly met much more discrimination in terms of being a woman than being black, in the field of politics.” Unfortunately, there are still so many glass ceilings to shatter.

It was also a moment that was not lost on me as a 15-year-old boy, a white suburban Jewish kid who cherished every word from the speeches of people like Robert F. Kennedy, Martin Luther King, Jr. and…Shirley Chisholm. There was hope and sanity in their words. The world could be better and together we could make it so. Assassinations broke hearts and ruptured hope, but still, through the tears there was always tomorrow and the rise of new visionaries.

To this day, Congresswoman Chisholm seldom receives the credit she deserves, or even much scholarship. That is, until Anastasia Curwood, Professor of History and Director of African American & Africana Studies at the University of Kentucky, wrote her most recent book, Shirley Chisholm: Champion of Black Feminist Power Politics. She joined me for a podcast this week on In House Warrior, the daily podcast I host for the Corporate Counsel Business Journal.

I know Garrison Keillor writes of a certain generation, “Back in the Sixties, when I was in my twenties, we sang ‘We Shall Overcome’ and clearly we did not overcome, we only created new hairstyles.” But it is a generation that brought an end to the Vietnam War; walked on the moon; launched the Civil Rights, women’s and environmental movements; created the EPA and OSHA; passed Title IX; dramatically increased living standards and brought us Shirley Chisolm. It may not be, as Tom Brokaw would write of an earlier generation, “The Greatest Generation,” but it had its moments of greatness and Shirley Chisholm was one of them.

When Shirley Chisolm drove through her Bedford–Stuyvesant district in Brooklyn in her sound truck, she would utter, “Ladies and Gentlemen … this is fighting Shirley Chisholm coming through.” And indeed she did. She was a staunch advocate for racial and gender equality, the plight of the poor and ending the Vietnam War. She sponsored increases in federal funding to extend the hours of daycare facilities and was a primary backer of a national school lunch bill (leading the charge to override President Gerald Ford’s veto).

She was co-founder of both the National Women’s Political and Congressional Black Caucuses, and in 1977 became the first African American woman and second woman ever to serve on the powerful House Rules Committee.

A 1974 Gallup Poll listed her as sixth on the list of most-admired women in America—ahead of Jacqueline Kennedy Onassis and Coretta Scott King.

And yet, up until Professor Curwood’s work, it was hard to find her.

Let us not become a generation like William Thackeray’s first novel: Vanity Fair: a Novel without a Hero. We need our heroes and we need to remember them.

This week is the 159th anniversary of the 54th Massachusetts Volunteer Infantry Regiment—the second African-American regiment in the history of the United States—charging Fort Wagner, the battle upon which the movie Glory was based. Despite knowing the odds were stacked heavily against them, the 54th charged the walls of the near impenetrable fortification on Morris Island off Charleston Harbor in South Carolina and suffered casualties nearing 50%.

At this frightful cost, they helped the United States win the war and, in one of the fiercest battles with an African American regiment after the Emancipation Proclamation (which among other things called for the enlistment of African American soldiers), proved they were second to no one.

“The men of the 54th knew they were not like other soldiers: they were symbols of how well Black men would fight for their country. This, in turn, would be a statement of whether Black men could truly be equal to white men under the country’s laws, once and for all, for in this era, fighting for the country gave men a key claim to citizenship.

The whole country was watching…and the soldiers knew it.”

Shirley Chisholm never wanted to be just a symbol. As Professor Curwood would write, she was only mentioned, “when ‘strong Black women,’ feminists, Black people, the 1970s, the Democratic presidency or outspoken political officials are a topic of discussion. She was much more than that.” Yes she was. And she, along with the 54th, were flesh and blood, fear and courage and also trailblazers and symbols. Heroes for their age and ours.

We are standing on the shoulders of giants. May we never forget our history nor write falsely of it.

“She showed up, she stood up and she spoke up.”
– Reading from the Minister at Shirley Chisholm’s funeral

Listen to When Failure Is Not An Option

This week’s guest columnist is David A. Andelman, a veteran foreign correspondent, formerly for The New York Times and CBS News, author, commentator and  foreign

What Could Corporate Execs Learn from Sun Tzu? (Part II)

This week’s article is part 2 of 2 by Scotts Marrs, Managing Partner at Akerman’s Houston office and our first guest columnist, on his experience

From Eternity to Here

“Ah death, a change of clothes.” –The 14th Dalai Lama The endless fields of amber grain. Valhalla so far in the distance it is, we

This week’s article is part 1 of 2 by Scotts Marrs, Managing Partner at Akerman’s Houston office and our first guest columnist, on his experience