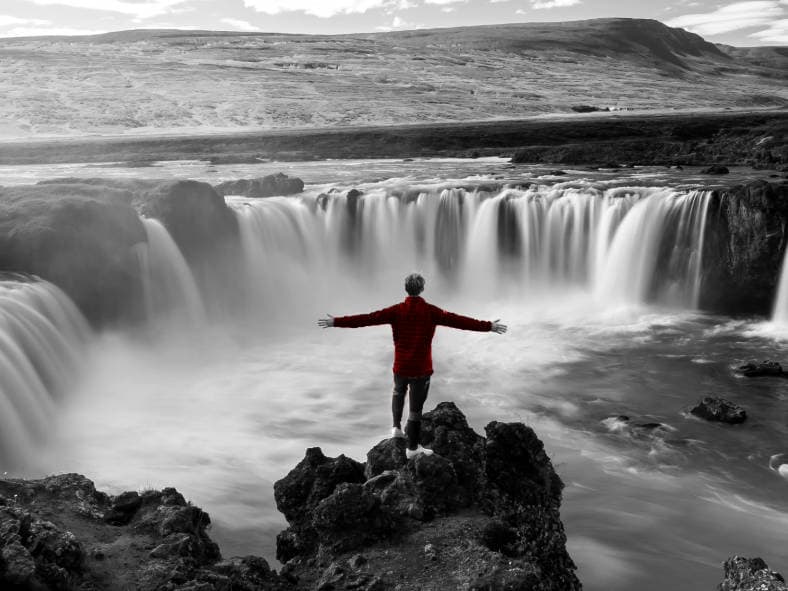 “Who is rich? One who is happy with their portion.”

My mother died on Christmas Eve, 1961, when I was four, my sister six and our father recently back from the Korean War, where he had witnessed so much carnage close up – including the time he lost a mate in a literal flash, standing just yards away. “He was there and then he wasn’t.”

Real life losses are not like Hollywood, where you are “all better” by the end of the movie two hours later. As Maxine Harris wrote in The Loss That Is Forever: The Lifelong Impact of the Early Death of a Mother or Father, loss stays with us in the little hours. It is there before we are even conscious of our memory. The smell of liver and onions cooking on the stove like our grandmother used to make. A photograph of a lost loved one. The reflex to make a call you can no longer make.

I had thought that with the loss of my mother at a young age and the subsequent loss of a friend in third grade and a grandfather a few years later, that I understood loss. But I was just a rookie.

I was speaking with my sister-in-law over the holidays, and she was talking about the loss of virtually all her family’s money in the financial crash a little over a decade ago and the subsequent loss of her husband and my brother a couple of years ago. I too had lost the entirety of my fortune, though for different reasons, and we talked about the gracious lessons of post-loss and the undeniable value of the phoenix. How we learn to focus only on the things that matter. How we have learned to ignore the vacuous narcotic of over-commercialism which bombards us on every form of media with the message that we are not whole or complete without their latest product. Want, it seems, is a message that must be repeated like the bombing of Dresden in World War II.

My days are filled with work, and what little time remains is comprised of only simple things – a walk in the woods with a neighbor, a book, cooking, feeding the wild animals that surround my home in the woods, exercise, prayer and reflection. It turns out that the constant desire for more and social climbing are a Jacob’s ladder to nowhere.

I think about all the things I have learned from crushing losses and, although I have lost sleep over the decisions I should have made to avoid them, perhaps this arduous journey is exactly where I should be.

I think about that a lot as I look at President Biden’s approval rating, which is mostly in the low 40s, largely due to the seemingly never-ending Covid variations and inflation. What, pray tell, did we expect? That the worst pandemic in a century would end with the flip of a light switch? That after World War II our supply chain was redirected into a postwar footing overnight? Who would have thought The Greatest Generation would spawn The Entitled one?

Other than inflation – fully to be expected after a globally disruptive event and at a fraction of the 1970s runaway inflation level – our economic numbers are among the best in 70 years. The Wall Street Journal reports, “A booming U.S. economy is rippling around the world, leaving global supply chains struggling to keep up…” with the expectation that upon the final numbers, the U.S. economy will have grown about 6% in 2021, a fabulous number that leads the world.

As to Covid, between the Trump and Biden Administrations, we have seen the development of a vaccine in ten months, not ten to fifteen years, the historical average. In the United States alone we have administered well over 500 million shots in one year. Miracles, it seems, do not do well in presidential popularity polls.

I never understood Ronald Reagan’s famous inaugural quote, “Government is not the solution to our problem, government is the problem.” Every time I drive on our highways, pass a public school, turn on my faucet and have instant access to plentiful and cheap potable water, read about our military, turn on electricity and a thousand other things, I am in awe of a form of government which has presided over the greatest experiment in democratic rule in the history of humankind.

I know it is human nature to go to NASCAR in search of accidents rather than to marvel at the ingenuity of humans and near-perfection of machines, and for newspapers to report the negative aberration of the norm as the definition of news. Perhaps, though, for a few moments a day, we should be grateful and in praise of these days.

One day a few years ago, when I was walking home from the metro, in the depths of cumulative losses so deep I saw no possible escape and ruination as a near certainty, I passed a man walking toward me whose face had been so disfigured that I marveled at his courage to walk in public. Forgive me, but in that moment, I realized how fortunate I truly am. Aren’t we all?

Perhaps there is no better time than the start of a new year to commit to a practice of focusing on what we have rather than what we don’t. The Book of Leviticus and the New Testament do not tell us to like our neighbor. They tell us to love them. And they certainly do not instruct us to envy them. Maybe in 2022, we should spend more time looking inside rather than out?

When my father descended into a near decade of dementia, I would think often of how I would eulogize him. The phrase that kept coming back to me was, “He understood ‘enough.’” Enough wealth. Enough house. Enough car. Enough to fill the heart. He did not need to search for happiness and contentment. It had found him.

I was thinking a lot about sudden loss and contentment when I did a show on In House Warrior, the daily podcast I host for the Corporate Counsel Business Journal just before the holidays with Joel Burcat, an old friend, former longtime practicing environmental lawyer, and past Chair of Saul Ewing’s Oil & Gas Practice. He is the victim of near-sudden legal blindness. After a period of depression and mourning, he turned to his second love, writing novels and, with the aid of technology, has now authored multiple environmental legal thrillers that are both electrifying and accurate, including Drink to Every Beast, Amid Rage and the just released Strange Fire.

The discipline to be content and introspective has never been more challenging than it is today when we realize that we don’t have the control – even over our own thoughts – that we once did. When we touch the keyboard, who is in control of what happens next? Hint, it isn’t us and the race isn’t even close.

On this subject, I interviewed Josh Lowitz and Michael Levin, co-founders of the research firm Consumer Intelligence Research Partners, for a show called Breaking Up is Easy to Do: The Internet Rewired Our Brains To Fall Out of Love With Brand Loyalty. We talked about their recent research on the decline of brand loyalty, substituted by internet-driven activities such as likes, influencers and reviews and the increase in brand switching. It’s not just impacting consumer product brands but professional service ones as well. How do companies re-earn trust and retain and grow customers in an age when switching and distant customers are the rule, not the exception?

For the more cynical among us, I interviewed James Carder, Chief Security Officer & Vice President of Labs at LogRhythm, to discuss New Trends in Litigation & Accountability in Cyber Crime Incidents. He spoke about the rise in ransomware and the increased life and death risks of recent cyber-attacks, including recent events at hospitals where deaths occurred after cybercrimes. He shared best practices, prophylaxis and other insights from lessons learned in the recent Log4j attack, Solar Winds, Colonial Pipeline, TJX and more.

I also interviewed a dear friend, Elizabeth Lampert of Elizabeth Lampert PR, about the beginning and history of law firm marketing and public relations, the challenges ahead for law firms and the risks for 2022 such as their real estate footprint, Covid-19 and staffing, crisis planning, DEI and climate change. Elizabeth makes the point that law firms seldom prepare or update crisis plans ahead of time, a distinct exposure at a time when the spotlight is increasingly turned on them.

And finally, for the aspirational in all of us, I hosted Beverly Behan, President of Board Advisor and the author of Becoming A Boardroom Star and Board and Director Evaluations, for a show named after her book, called Becoming a Boardroom Star. She discussed the GC’s role, board evaluations, the difference between champion board leaders and preservationists, board innovation, succession planning and more. She has worked with nearly 200 Boards of Directors over the past 25 years ranging from the Fortune 500 to recent IPOs in the US, Canada and around the world. Beverly fervently believes that great companies deserve great boards, and her work focuses on taking boards to the top of their game in overseeing the companies they govern. Now that would certainly seem to be enough.

As historian Heather Cox Richardson wrote last week, we cannot change the past, as much as we would like to, “But it is never too late to change the future.” Shall we?

Listen to The Backup Plan

Listen to The Duchess of Law Firm PR

Listen to Becoming a Boardroom Star