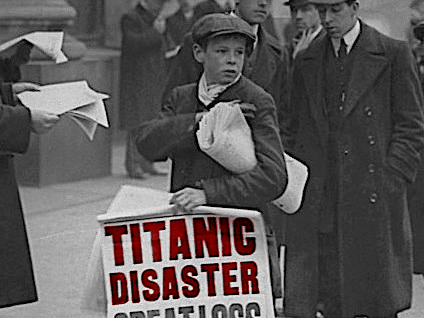 First in a Series on Reputation Management and Risk Communications

“But in all my experience, I have never been in any accident… of any sort worth speaking about. I have seen but one vessel in distress in all my years at sea. I never saw a wreck and never have been wrecked nor was I ever in any predicament that threatened to end in disaster of any sort.”

There is a natural conflict between the lawyers working on litigation and crises that are likely to garner public attention and the communications professionals working with the media. Lawyers need and want time to determine all of the critical facts, potential liability and necessary information, while the communications side of the house is working to meet reporter deadlines before the story – and likely a premature, negative narrative – goes viral.

When the White Star Lines was preparing to launch its unsinkable cruise liner, the Titanic, it recruited its greatest captain, E.J. Smith, on the brink of retirement, to stay on for one more transatlantic crossing so he could skipper the new pride of the White Star fleet from Southampton to New York. He was chosen due to his unblemished history. So smart and experienced a captain, he had never so much as experienced a near accident. He was the perfect choice for the maiden voyage.

Two days prior to hitting an iceberg, he told his assistant telegraphist Harold Bride, who had been receiving messages of potential danger ahead, that he understood the warnings of icebergs and would adjust. He also told Bride that the new technology, the telegraph – the 1912 version of Twitter – should no longer accept incoming messages but instead be used exclusively for the many wealthy passengers who wanted to send ship-to-shore messages about being on the “Wonder Ship.”

To be forewarned is to be forearmed.

When the Titanic did strike the iceberg, Captain Smith maintained his confidence in the guarantee of an unsinkable ship combined with his lifetime of sailing experience. The sinking of the vessel was beyond his comprehension.

Over the next two and a half critical hours, unpracticed crew and passengers tried desperately but tragically ineffectively to load the lifeboats. Two ships fairly nearby – the RMS Carpathia and the SS California – replied too late. The California, six miles away, mistook the Titanic’s desperate flares as “company rockets.” Its telegraph officer had shut down for the night and as a result there was no one to receive the frantic message: “SOS Titanic calling. We have struck ice and require immediate assistance.”

Dreadfully, through misfortune and misunderstanding – two traits common in crises – the California would take no action to save any passengers. They too could not comprehend what was happening because of the unsinkable narrative they believed to be true. The Carpathia, fortunately, would navigate the ice flows and arrive in two hours, saving 705 passengers.

The golden hours are the opening hours of a crisis – when danger is rushing in and information is sparse. It is where history is made.

In high profile litigation and crisis matters, it is defined as the time between when we learn of the matter and when legacy and social media control the narrative. That means if we do not act with consideration to the public, others get to define the hero and the villain, influence future jurists and set the foundation for liability. No matter how independent justices and juries might be, by the times a matter goes to trial, as citizens, they have read the newspapers.

Truth is a race. It is not what we know, but what we believe first. Once we assume our perception is accurate, we become believers, and shaking us from this viewpoint is exceptionally difficult. Just ask Captain Smith. He knew the ship could not sink.

In many areas of litigation – food, pharmaceuticals, labor and employment, etc.; the list is too numerous to mention – the plaintiffs’ bar has already optimized the web so that when a matter occurs they already have influential content at the top of the major search engines. As the old joke goes, if you want to keep a secret, put it on the second page of Google. Nearly no one looks past the first few links on a web search.

The plaintiffs’ bar is busily controlling search engines right now, which are designed not only to harvest plaintiffs but also encourage journalists and the public narrative. Control the search, control the story.

The result? The defense bar is often already behind on the public narrative before the first client meeting.

At 1:22 am on June 21, 2021, when the Champlain Towers South collapsed in Surfside, Florida, tragically killing 98 people, the initial media reports over the first three days – thousands worldwide – inferred that the volunteer condo board had been negligent in its oversight. It goes without saying that media on high profile matters is viral. Reporters have to quickly post stories and go on air. Social media follows and codifies the earliest reports. However careful the journalists are, theories are presumed to be facts or certainly interpreted by the public to be so. Imagine the difference if we got to describe the wolf in Little Red Riding Hood first: ‘He’s sensitive and endearing – and maybe a vegetarian’ rather than “Big and bad.”

In an environment where we see 5,000 to 10,000 advertisements a day, not to mention the other messages demanding our attention, all we can do is categorize. Good, bad; guilty, innocent. There is no time for analysis or processing. No one parses the media the way defendants and lawyers do. For everyone else, they just decide who deserves their empathy.

Once these initial impressions are made, audiences move on to the next news cycle. The only thing that remains is our categorization. In this case, early media reports made it appear that the board members – one of whom was killed; others who lost their homes, friends and fortunes – had been previously negligent.

Over the next 72 hours, hundreds of conversations were had with journalists globally to set the record straight, which changed the global narrative and the course of the litigation.

While speed, triage and instantaneous decision making is required in crisis matters, our training as lawyers is to gather all the facts and be certain before making any public statements, if any. While this training makes perfect sense it also creates a vacuum filled by others, few if any with your client’s sympathies in mind.

While every situation is different, the Champlain tragedy identified four key strategic steps:

Every matter is different and requires sui generis strategies developed in concert with the lawyers and communications. The critical question for all matters is how we use the “golden hours.”

While this was not true in Surfside, it is best for the lawyers and crisis communications professionals to have a relationship in peacetime. There are too many judgement calls required not to have developed a trusted relationship ahead of time when no one is watching.

Lawyers are among the best educated and trained professionals in the world. But just like with Captain Smith, there are limits to that expertise.