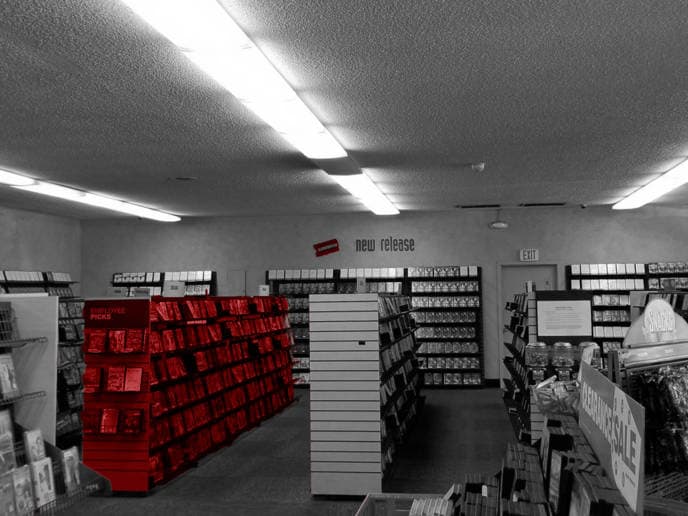 “Regrets, I’ve had a few
But then again, too few to mention
I did what I had to do
And saw it through without exemption
I planned each chartered course
Each careful step along the byway
But more, much more than this
I did it my way”

Between October 19, 1985, and January 12, 2014, Blockbuster  went from a single mega-store with 8,000 tapes – unheard of at the time – to over 9,000 stores, employing more than 84,000 people. David Cook, its founder, had glimpsed the future in the limitations of the small, locally owned neighborhood video stores and knew there was a better way. Subsequent owners would expand Blockbuster beyond his wildest dreams, but none could appreciate the future. Pay per view, on demand, Amazon and Netflix – even though a young Reed Hastings had come to Blockbuster hat in hand asking to be bought – would turn the omnipresent blue and yellow signs into antiques. Sometimes we can see what’s next and sometimes we cannot even read the present.

With the exception of Merlin in the Arthurian legend Le Morte d‘Arthur – who lived backwards so that his past was our future – we’re all guessing, doing the best we can to read the tea leaves. The epithets of formerly great companies that helped invent the future only to become too comfortable with the present are a reminder to us all.

Sears, whose annual catalog was first released in 1888, served as a model for the internet, seemingly providing endless access to the world of commerce by simply turning a page. Five generations of children grew up waiting in anticipation of the annual phonebook-sized catalog every summer so they could circle their wish list for Christmas.

Radio Shack had a 30-year head start on Apple and ironically was the store where Steve Jobs and Steve Wozniak bought their Tandy computer to connect to a television and create the first visual computer. “You’ve got questions, we’ve got answers,” although apparently not about anything most people are interested in buying anymore.

Avon, which all but invented multi-level marketing and provided whole generations of women a path to entrepreneurship, now struggles with relevancy.

Kodak, which had the patent on digital photography, making too much money from film development to consider what was next.

The road to success is littered with the skeletons of formerly great companies who invented the future only to lose their way.

What would happen if we could live more like Merlin, and see the future? This week on In House Warrior, the daily podcast I host for the Corporate Counsel Business Journal, I interviewed five trailblazers – people who see the future for the benefit of the rest of us:

Andrew Gratz, Associate General Counsel at LyondellBasell, on what in house counsel want, specifically on ESG and how ESG demands by multiple constituencies are going to change in the near future.

Jim Pattillo, a partner with Christian & Small – a member firm in the Primerus law firm network – a veteran of more than 70 trials to verdict in both state and federal courts, on litigation trends since the start of COVID.

And finally, Kailash Ambwani, Chief Executive Officer at Constella Intelligence, on what companies can do before there is a breach to reduce risk. Constella is a leading global Digital Risk Protection business that works in partnership with some of the world’s largest organizations to safeguard what matters most for each company and defeat digital risk. While most discussions of breaches are about what to do afterwards, Constella focuses on providing the intelligence to help reduce risk and prevent cyber-attacks.

It seems so much of our lives are like the old FRAM oil filter commercials – “You can pay me now or pay me – a whole lot more – later.” Why not spend some of today eliminating future risks?

Robert Zemeckis, who – along with Bob Gale – made the famous Back to the Future movie trilogy, found accidental inspiration for the film when visiting his parents in St. Louis and looking at his father’s high school yearbook. Sometimes we have to look backwards to see forwards.

Since the theme music scored by Alan Silvestri for Back to the Future was instrumental, we’ll need to go to another movie – The Rocky Horror Picture Show – for the music to take us out.

Listen to The Founder of Law Firm Marketing

Listen to Closing the Cyber Barn Door Before the Horses Leave