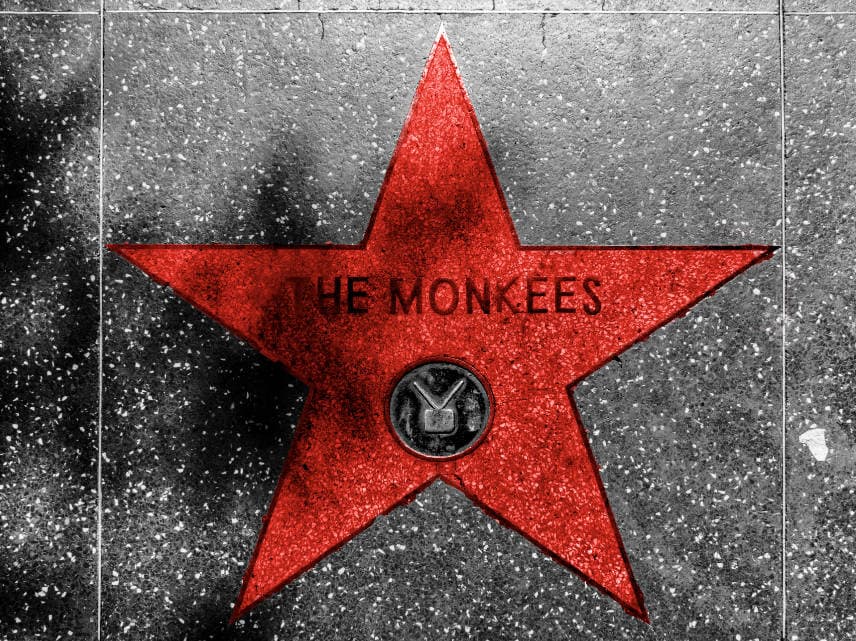 “Here we come, walkin’
Down the street.
We get the funniest looks from
Ev’ry one we meet.
Hey, hey, we’re the monkees
And people say we monkey around.
But we’re too busy singing
To put anybody down.”

– By Tommy Boyce and Bobby Hart for The Monkees

It’s been years since I cried outright, but the older I get, the more often I choke up. It passes, like a sea breeze: rather quickly, but unforgettable. It happened three times this past week. It would have been four, but I am in so much denial over the U.S. Supreme Court that I am more stoic than melancholy.

One of the few arguments I ever had with my younger sister was over the validity of The Partridge Family. It was the fall of 1970 or 1971 and The Partridge Family television show – loosely based on the musical family, The Cowsills – was coming on air. I didn’t want to watch it on the “kid’s” television, the one the four of us shared in the basement. The Monkees, I argued, was a real band. This was just television.

Of course, the Monkees started out the same way, debuting on NBC in 1966, when Michael Nesmith, Peter Tork, Micky Dolenz and, of course Davy Jones, beat out 433 other aspiring actor/musicians answering an advertisement in the Hollywood Reporter and Daily Variety – “Madness!! Auditions. Folk & Roll Musicians-Singers for acting roles in new TV series. Running Parts for 4 insane boys, age 17-21. Want spirited Ben Frank’s types. Have courage to work. Must come down for an interview.”

After seeing The Beatles’ film, A Hard Day’s Night, Hollywood executives Bob Rafelson and Bert Schneider were looking for the next version of Beatlemania, though they wanted a band far more controllable than the brilliant and enigmatic Beatles and much more PG than the “bad boy” image of the Rolling Stones.

They got half of what they wanted, with The Monkees outselling the combined sales of the Beatles Sgt. Pepper’s Lonely Hearts Club Band and the Rolling Stones Their Satanic Majesties Request in 1967. What they didn’t get was control. Only The Partridge Family’s Shirley Jones and her stepson, David Cassidy, could perform. With The Monkees, all four improved enough to play live concerts by December of 1966. They went on tour, famously having Jimi Hendrix open for them for a brief period, until it was clear that The Monkees’ young fans could not appreciate this “psychedelic rock god,” as the History channel memorialized that ill-fated tour. Ill-fated or not, Jimi Hendrix was never going to open for The Partridge Family.

Michael Nesmith was the cerebral one who inspired MTV and The Eagles and wrote a number of generation-defining country-rock hits including Different Drum, made famous by Linda Ronstadt and The Stone Poneys. With Michael’s passing, three of The Monkees are now gone and only Micky Dolenz remains.

Perhaps one of the most important things The Monkees achieved, beyond 20 Top 100 pop hits, is that they made the British invasion of rock music safer and more palatable for a generation of parents not yet comfortable with what their kids were listening to.

As with so many of my peers, I was saddened by Michael’s passing, for he represented unrepressed youth and with a blink, he was the “old man” in Neil Young’s song by the same name.

The two other things that made me tear up this past week included the Army-Navy game, a game my late father and I watched or went to so many times over five decades that it became a family tradition. Even my older sister, who has no interest in football, watches and texts me during the games, certain as I am that our father is watching as well.

My impressions of the military were largely formed as a teenager as the Vietnam War raged. Despite my deep appreciation for the service academies and the military, my anti-war feelings at the time were too strong to consider joining the military, an experience – or non-experience – I’ve come to regret.

Out of the antiwar movement, I think we learned the wrong lesson, which is that there should be no draft. But without any form of mandatory service to country – including non-military service programs – we have generations who don’t fully appreciate a collective sense of commitment to our nation. Covid-19 is a threat on par with our World Wars, the 1918 Pandemic and the Great Depression, yet if we were attacked tomorrow, how many would line up outside of the military recruitment stations? We can’t even agree to wear masks or take a vaccine to battle a killer that has left 800,000 dead in its wake. I never fully appreciated the Korean War mantra, “Freedom is not free,” until these past few years. We don’t speak of collective sacrifice. We speak of individual liberties, as if we are 330 million independent nations.

And finally, I met a woman. Well, not really. She reached out online and over nearly a month we developed a lovely conversation based on daily texts and a few calls. Like all relationships born on the internet, I was suspicious. The suspicion only grew, but so did the intensity of the conversations. It was the triumph of hope over experience as the void she filled, the hope she provided, the belief that magic could exist did battle with each red flag – all subtle, but the sheer volume of them ultimately lead me to know that she was not real and that it was a slowly developing scam.

This is not a story about the internet, though it could be. It is about the need in each of us to believe in something bigger than ourselves. That four inexperienced actors and amateur musicians could rocket to superstardom and help us usher in the era of Rock ‘n’ Roll. That young men and women could believe in something so strongly they are willing to sacrifice everything for the rest of us. And that I, a veteran of a thousand Washington, D.C. battles, could still overcome my cynicism, if only for a short while, and hold out hope that there was beauty in this ever-challenging world.

We all hold out hope. It is what gets us through every day. It is what Ronald Reagan always understood and Donald Trump never will. We want to believe: in God, in country, in family, in love. It is what gives life its meaning.

At about the same time I was becoming enamored with The Monkees, I was reading and lionizing Hubert Humphrey, who was the lead author of the Civil Rights Act of 1964 for virtually no political gain other than that he thought it was the right thing to do and long overdue. Along with Humphrey, there was Walter Mondale, Attorney General of Minnesota, writing an Amicus Brief for a criminal defendant and getting 22 state AGs to follow his lead in Gideon v. Wainwright, the right to counsel. An exceedingly rare thing for an Attorney General to do, and, again, for no political gain. He simply and strongly believed in the rule of law. It was a time when faith in institutions and the belief in the possible nearly bursts our collective hearts.

Today, one of the great things I fear is the tremendous loss in stature of our institutions: first the White House, Congress, and the media, and now, the United States Supreme Court. The difference between democracy and mob rule is the rule of law. Without it, “The law is politics by other means,” as Samuel Moyn, the Henry R. Luce Professor of Jurisprudence at Yale Law School and a Professor of History at Yale University said to me on In House Warrior, the daily podcast I host for the Corporate Counsel Business Journal.

I also interviewed three other lions of the law this week, on the primacy of the Court, the rule of law, and antitrust and environmental law.

Thomas (T.L.) Cubbage III, President of The Center for American and International Law (CAIL) talked about the current and historic threats to the rule of law, Jim Crow, John Birch and improving the quality of justice.

I also spoke with Tad Lipsky, “the Dean of the Antitrust Bar,” a now retired longtime partner at Latham & Watkins, Assistant Professor and Director of the Competition Advocacy Program at the Global Antitrust Institute at George Mason University and former Deputy Assistant Attorney General under William F. Baxter, President Reagan’s first chief antitrust enforcement official. He helped spark profound changes in antitrust law and policy and in this episode discussed the state of antitrust law; Lina Khan, Chair of the FTC; antitrust and high tech; and what the Biden Administration should and should not be considering when it comes to antitrust.

Ben Wilson, the outgoing Chairman of Beveridge & Diamond, who will be retiring after more than 35 years at the firm, spoke with me about environmental law; the right to counsel, particularly on unpopular energy and environmental issues; the rule of law; diversity and the environmental Bar; the growing second “E” in ESG – “employees” – as well as some personal and historical thoughts. Though he will appear again on future shows, his daily leadership and vision will be missed.

For the first half of our lives, we are collecting things. In the second half, it is about evanesce – the slow fading away into nothingness – like the Monkees. As for the Court, I pray this is not its moment of evanesce.

“I’m a Believer” – Written by Neil Diamond for The Monkees

Listen to The Law is Politics By Other Means

Listen to The Sanctity of the Rule of Law

Listen to The Dean of the Antitrust Bar

Listen to The Dean of the Environmental Bar